The defenceman has represented Sweden on a number of occasions, playing in the U-16, U-17, and Ivan Hlinka Memorial tournaments.

Andersson, who was selected 53rd overall in the 2015 NHL Draft, is coming off a strong rookie season with the Barrie Colts; he was fourth in team scoring with 12 goals and 64 points in 67 games.

Next Treliving satisfied with draft haul 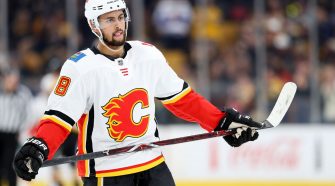