Jakub Nakladal is ready for North America, both on and off the ice.

The 27-year-old, and elder statesman at Calgary Flames development camp, made his first trip across the Atlantic — ever — in the hopes of carving out a career in the National Hockey League.

And time to try to accomplish a lifelong goal.

“I think when I was maybe six years old, I started to play hockey because my brother played hockey, too,” Nakladal said following his first on-ice session as a member of the Flames. “We would like to play in the NHL, but it’s just a dream.

“After the World Championships when we talk about it and I saw that it’s a small chance to make it so it was absolutely great for me and I decided I wanted to try it.

“It’s a great feeling for me. It was always my dream and it’s great to be here in this organization.”

Nakladal had three goals and 15 points to go along with 63 penalty minutes in 50 games in 2014-15 with TPS Turku of Finland’s SM-Liiga. He spent three seasons in the Kontinental Hockey League prior to that, with Ufa Salavat Yulayev, Moscow Spartak and Prague Lev, recording two goals and 20 points in 117 games. Prior to that, Nakladal spent six seasons prior to that with Pardubice HC in the Czech Republic.

He also led the Czech Republic’s blueliners in scoring at the 2015 IIHF World Championship, with five assists in 10 games.

Now, he’s at development camp alongside Flames prospects prepping for a potential career in Calgary.

“We talked about it with GM Brad Treliving and head coach Bob Hartley that it’s going to be better for me to come during the summer and see the city and the organization and meet the people here,” Nakladal said. “I think it’s great for me.

He’s already chatted with current Flames and fellow Czech defenceman Ladislav Smid about the adjustment to life in North America, both on and off the ice. He’ll do the same with Calgary forward Jiri Hudler, too.

But until he hits the ice with him, Nakladal will continue his fine-tuning alongside Flames prospects, some nine years his junior.

And it doesn’t bother him one bit.

“My roommate, he’s 18, I think, and I’m 27,” Nakladal said of free agent invitee Tomas Soustal, who is also from the Czech Republic and won’t turn 19 until next February.

“It’s crazy, but it’s okay. With my English, I feel like he’s my father, because he speaks better English than me.” 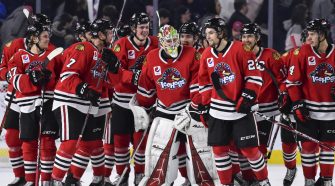