On one side of the hashmarks stands 6-foot-7, 208-pound Hunter Smith, set to patrol the right wing for the Oshawa Generals. Opposite him, and perhaps eagerly anticipating a quick puck drop from a linesman, is Barrie Colts left winger Andrew Mangiapane, all 5-foot-10, 170-pounds of him.

“We go at it pretty hard,” said Smith, who has spent the past three seasons with the Ontario Hockey League’s Generals. “We always played hard against Barrie and those were always tight games. Tough barn to play in and their fans are right on top of you there.

“We went at it. They swept us in a playoff series so we always had some aggression from my first year in the league. They caught me the last two years.”

One doesn’t have to remind Mangiapane.

But since being drafted by the Calgary Flames in the sixth round (No. 166) two weeks ago, it’s water under the bridge.

“Oshawa and Barrie have a bit of a rivalry there,” said Mangiapane, who had 43 goals and 104 points with Barrie in 2014-15. “We’ve had a couple words but now we’re on the same team, the problems are pushed aside. He’s a great guy on the ice and off the ice so I’m happy to have him with the organization here.”

“I remember he jumped Mange once,” said Rasmus Andersson, Maginapane’s teammate with the Colts and Calgary’s top pick, 53rd overall, in the 2015 NHL Draft.

“I think once I grabbed him in a scrum or something,” he said. “It’s on the ice.”

“During the season, he kind of gave me a hard time. We’re friends here now. We’re on the same team. He’s a good guy, right. Me being beside him, looking up at him, he’s pretty big. He’s a good guy and a good guy to have by my side now.”

They’re on the same side now, both wearing the colours of the Flames in development camp.

But with Smith in the red, blue and white of the Generals and Mangiapane in the navy blue, yellow, red and white, there were battles.

Andersson can attest to the bully known as ‘Big Rig’ — sometimes affectionately and sometimes not.

But, declared Mangiapane, not as intimidating to the smallish forward as one might assume.

“I’ve grown up like that,” he said. “I’ve been small my whole life and have faced guys like him. I’m pretty used to it by now. I’ve got to use my low centre of gravity to my advantage.

“I stay low. Go fast. Hopefully they don’t catch you.”

It’s not an issue. Not anymore.

And, at least, not at Flames development camp.

The hard feelings, if they existed before, are all wiped away with the ‘Flaming C’s draped on their chest.

“We play hard against each other and that’s good to see,” Smith said. “For us all to be here, I talked to them. We’re all on good terms. Off the ice it really doesn’t matter. 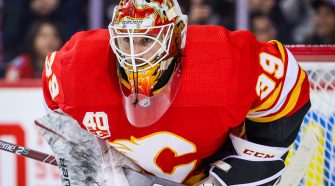