Don’t call it a reunion tour. The band hasn’t even really split yet.

But development camp for the Calgary Flames surely counts as a final encore for the Providence trio.

Teammates for the past three seasons, Jon Gillies, Mark Jankowski and John Gilmour are sharing the ice together one last time at camp before parting, at least temporary.

Jankowski and Gilmour will reunite for senior seasons at Providence College, while Gillies will split to embark on a pro career in the Flames organization. It’ll be the first time in four seasons the collective aren’t sharing the same ice.

“We were talking about it the other night and how it’s weird,” said Gillies, who ended his collegiate career by signing a contract with the Flames in April, but remains in his Friars mask at development camp.

“Your parents are right when they tell you the relationships you build in college are the ones you cherish forever. It’s definitely a lot harder than I thought it would be.

“It’s definitely exciting and cool to be this close and be at the threshold of your childhood dreams but at the same time, the relationships you build along the way, you don’t want to let those go.”

They haven’t had to, yet.

For a third consecutive summer, the grouping is in Calgary to attend development camp.

Just when Gilmour thought he had shaken Gillies for good, too.

“We were trying to get rid of him but he keeps coming back,” said the defenceman, tongue firmly planted in cheek.

“We kind of already said our goodbyes but we’re rooming together here. It’s kind of like he never left. I guess it wont kick in until next year when he’s not on campus with us and we’re watching him on TV.”

The collective trio went out in style.

The Friars won the Frozen Four shortly before Gillies signed with the Flames, marking the first NCAA national title in the school’s history. The goaltender turned in a 49-save performance in the final to clinch the win.

But with Gillies graduating to the pro game, Gilmour and Jankowski are left to defend.

“We want to have the best season we can as a team and then individually. It’s our last year of having a safety net considering we can’t say we’re going back to school any more. We’re in the real world after next year. We’ve got to work our bags off, me and Mark, because we want to do this for a living.

“Mark and I have been talking all summer. We’re really motivated and we’re motivating each other. We want to make that step together because we only have one year left. That’s the next step. If we work hard and they think we earned it, we’ve got to go out there and earn it.”

But before the attention turns to next season, the group is enjoying one final development camp together.

“It’s unbelievable,” Jankowski said. “Those two guys are both in my class. I’ve lived and played with them the past three years. It’s great for us to accomplish that at Providence and to come here and have a little familiarity with a couple guys, reminisce about the season a little bit and look forward, me and Gilmour to next year and Jonny will do great in the pros. It’s been great to have those guys.”

The feeling extends all the way around.

“It’s been a fun week, especially with those two,” Gillies said. “We’ve been really close throughout our three years going through this journey with the Flames. We’re going to try to make these last couple days count.” 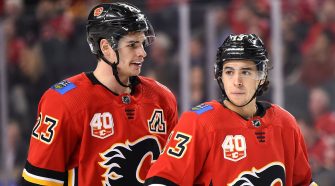