An early arrival is cautioned. The ‘Red Mile’ no longer remains dormant.

After a six-year absence, and some will argue longer, the ‘C of Red’ is alive and well.

It’s back. And it’s best to show up early. Or miss out.

The patrons who are prompting the early arrival? They’re eager with anticipation. Cautiously.

The particular interest of those donned in red scattered wall-to-wall at Roosevelt isn’t hard to distinguish.

Calgary, both the city and the team, have been starved for this.

Calgary, both on the ice and in the stands, haven’t had the opportunity to celebrate a series win since 2004, when the Flames fell but one game short of raising Lord Stanley for the second time in club history.

It’s been since 2009 since the opportunity has even existed.

And though it’s only the first round, and the fifth game into the playoffs at that, the nervous tension, cautious optimism and sheer excitement is palatable a full 120 minutes before the opening faceoff.

Welcome to life on the ‘Red Mile’.

The bar, spilling over with red — except a rare spattering of blue and green amidst those sporting predominantly black, but still proudly displaying the ‘Flaming C’ — have shown up early enough are treated to the Tampa Bay Lightning rallying late into the third period — a theme not uncommon in Calgary — to force overtime before eventually dispatching of the Detroit Red Wings in overtime.

A good omen, one comments.

Tampa Bay’s win sparks a shift of coverage to the Canucks and Flames and, without prompting or hesitation, boos reign as Vancouver sprints down the tunnel and spill onto the ice in the first image that the action is about to pick up.

The jeers, prompted by a table adjacent, spreads onward to the bar until the local side does the same, spilling out chants and cheers.

The first check, Michael Ferland on Kevin Bieksa early in the contest, illicits a little response, but nothing significant.

A David Jones goal — his second of the playoffs — welcomes in the significance of the moment. The crowd, expectedly, erupts.

Beating Ryan Miller just 2:40 into the game, Jones sends those sitting to their feet and those standing into the air as he puts the good guys, in this crowd’s eyes, up 1-0 early and prompts nothing but hugs and high-fives amongst friends, acquaintances and complete strangers.

Two hundred and twenty, it’s suggested, rise to their feet, not counting another 49 perched on the patio outside. The others, nine or so, sporting blue (or vintage black, or red, or yellow, or white) remains seated. Silenced. Looking into their mugs.

A wall of red jerseys — vintage, regular and horsehead alike — form a wall along the bar as the clattering of oversized mugs is replaced by the clanking of shot glasses as the goal is chased by good times.

They’re immediately replaced by looks of ‘are you kidding me’ from fans, both in red and blue, when Jonas Hiller goes post-to-post to deny Radim Vrbata, and a polite applause on another that follows to preserve a modest lead to send the heroes into the first intermission to the good.

Fittingly, a glass behind the bar crashes to the floor, prompting an ‘Opa!’ cheer and a poke at Vancouver’s chances of extending the series.

But Vancouver was quick to silence those back in Calgary, as Nick Bonino’s perfectly placed shot ties the game 1-1. The awkward hush, broken only by a single clap from a brunette in blue brave enough to fly her colours, goes unanswered heading into a third period destined to define the game.

As the third period strikes, Calgary’s chant ignites again, as if the crowd’s cries of ‘Go Flames Go’ can travel the nearly 700 kilometers through the Rockies and end up at Rogers Arena to give the visitors a jolt.

It won’t. It won’t stop the faithful, either.

But it is quickly silenced by Daniel Sedin.

Just two minutes in, 1:47 to be exact, Sedin bangs home his first of the playoffs to whip those in Vancouver into a frenzy.

Back in Calgary, nine applaud. A couple hundred shrug.

“We’ve come back from worse,” litter more than a few conversations.

It’s true. Yet it doesn’t happen.

Profanities unfit for print follow after a key save from Miller a minute later.

More follow when time expires in regulation, despite a push with Hiller on the bench for six attackers, forcing Game 6 — in friendlier territory — with the hope that the home side can book a date with the waiting Anaheim Ducks in the second round.

Advancing will wait, at least temporary.

A few cheer the outcome. They aren’t in red.

The result dulls the gathering.

A red sea doesn’t flood 17th, where foresight prevails — parking is now banned for all subsequent skates the home team will have for the duration of the playoffs.

But rest assured. The chatter in Roosevelt doesn’t dull. It doesn’t die.

And will make waves again Saturday.

Special thanks to Jay, Jeff, Jenelle and the staff at Roosevelt for playing wonderful hosts to the Calgary Flames in Game 5. 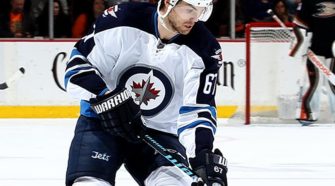