It has been quite the year-and-a-half for right winger Garnet Hathaway.

After wrapping up his collegiate career at Brown, where he graduated with a business economy degree, the Kennebunkport, ME product suited up for eight regular season dates and one postseason game with the Abbotsford Heat in the spring of 2014.

He then attended the Flames summer development camp, played in the 2014 Young Stars Classic in Penticton, and participated in Calgary’s training camp in September — where he was the second fittest skater in attendance, only bested by Flames captain and fitness nut Mark Giordano. 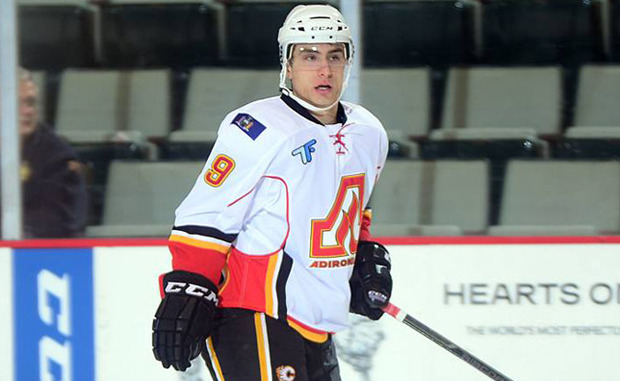 Those experiences gave him a taste of what was to come in the 2014-15 season, which would see him dress for 72 games with the Adirondack Flames in his first full professional season.

He notched his first professional goal on Oct. 25, in a 7-3 thumping of Rochester at the Glens Falls Civic Center, and then recorded his first multi-point outing as a pro the following game, with a goal and an assist in a 7-6 victory over San Antonio.

In total, Hathaway ended up scoring 19 goals — tied for second amongst all Adirondack skaters — and 36 points in the 2014-15 campaign. It was a steep learning curve for the winger, who had to adjust quickly to the amount of hockey played at the AHL level and the pace of professional hockey.

“The first couple of games of the year you really get your feet under you,” he told CalgaryFlames.com. “The game is a lot quicker than college, guys are more skilled, guys hit harder. You don’t want to get comfortable but you’ve want to start excelling and you’ve got to pick up things as they go.

“That starts in practices and with all the skilled guys around you end up getting better and you work on small things throughout the year.”

Hathaway credits Ryan Huska, who took over the head coaching gig in Adirondack last season, for easing him into the AHL and making sure no detail of his game was overlooked.

“Those first couple of games he would bring you into the room and he would tell me, ‘You’ve got to work on this part.’ He picks out the small points of the game,” Hathaway said. “At first you’re like, ‘That’s just a little thing, you don’t really need that,’ but as you get more games under your belt and the coach keeps telling you about stuff you’re like, ‘Wow, that really makes a huge difference in how you play and how things work out.'”

While he is proud of his accomplishments, he isn’t focused on the past. The 23-year-old has his sights on the next step in his career: landing a roster spot in Calgary.

“It’s my dream to play in the NHL and I got a step closer to that in the off-season – right at the end of the AHL year when I signed a contract,” he stated. “I’ve got to go into camp with confidence I can make the team and that’s what I want to do.”

The starting point to Hathaway’s goal is the Flames’ development camp, which is taking place this week at WinSport. The week-long event offers him the chance to refine parts of his game and showcase his talent to Flames’ coaching staff members and management.

“Right now I think it’s a huge development step. The coaches are really going to work on individual skill in this camp,” he said. “You want to shine in your own light. A big part of my game is hitting guys and being really physical and controlling the puck. You’re not going to hit your own teammates like that, you’re probably not going to drop the gloves in a camp like this. You just kind of want to work on your work ethic, your attention to detail.

“Things like that are going to highlight you as a player and your character.”

During his rookie season in the AHL, Hathaway was able to lean on and receive advice from older more experienced players. Having that support system is invaluable for young players and Hathaway wants to provide that kind guidance for his current and future teammates during this camp.

Hathaway’s mindset is that helping his fellow prospects succeed will only strengthen the organization and create a more cohesive bond throughout the Flames pipeline.

“I really want to be a leader here for the younger guys. A couple of guys that I was training with … it’s their first time here and it’s eye-opening. For me last year, you look around and you don’t want to get lost for why you’re here and you definitely want to impress.

“I want to be that guy who not only impresses for myself but also helps those guys impress because we’re all teammates here.”

Next Development Camp: 5 Players To Watch 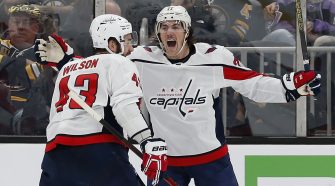