The loss of captain Mark Giordano was deflating.

But it’s not going to run the playoff aspirations of the Calgary Flames flat.

Despite the dampened spirits with news that Giordano would miss the remainder of the season with a torn biceps tendon, the Flames aren’t going to let it down their push to the post-season.

“It’s just natural when you hear news like that,” defenceman Kris Russell said. “It’s disappointing. But we’ve got a game tonight and the (Philadelphia) Flyers aren’t going to feel sorry for us that we lost [Giordano]. So we have to make sure we come out and really compete and try to bring his character and leadership and step up.

“I think the leadership roles, I think a lot of guys have to step up a little more. He was our voice, kind of the heart beat of our team. It’s not just up to one guy. It’s up to the whole dressing room. We need everyone stepping up and having a voice. It can’t just be two or three guys. We’ve got to lead and play as a committee. That’s how we’re going to be successful.”

At the time of the injury, Giordano’s 48 points were tied for first among NHL defencemen and remain tied for Calgary’s lead, and his 25:10 of ice time per game is one second behind defense partner TJ Brodie for most on the Flames.

Giordano also leads them in driving possession; his even-strength shot-attempt percentage of 48.36 is the best on the Flames among players with 10 or more games. 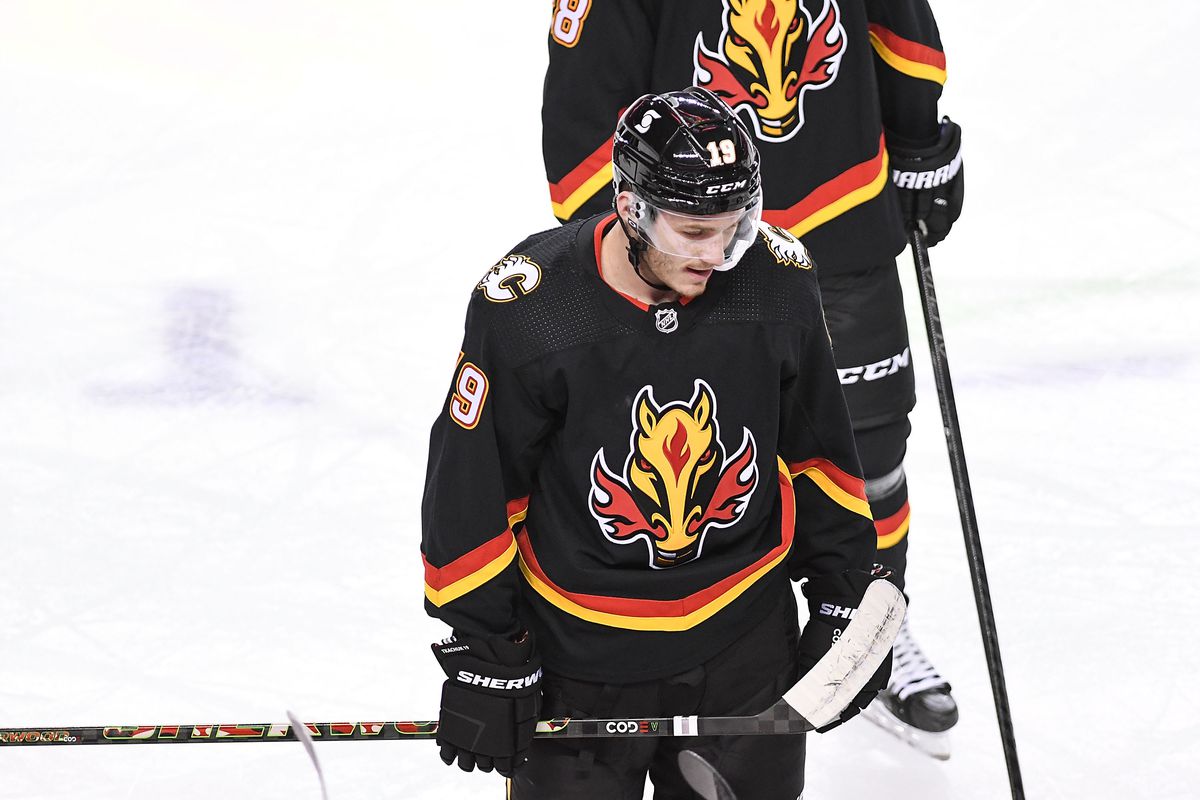 “You can’t explain how important he is to this team,” forward Joe Colborne said. “He does all the important things behind the scenes that really make him such a great leader. Now it’s up to us to kind of pick him up a little bit. I know he feels really bad.

“With the year he was having and how much success and how important he was to our success, too, it’s going to have to be a collective effort. We’re all going to have to step up. Our d-corps has been solid all year, we have a lot of trust in those guys, and you do everything you can to replace as much as possible because you can’t replace all that [Giordano] does.”

The Flames aren’t going to try to replace him.

Instead, the collective will need to carry the load left by Giordano’s absence.

“You don’t replace a player of this caliber,” Calgary coach Bob Hartley said. “It’s going to be by committee. I think it’s a great situation for all the defencemen on our team. They have a chance to grab some power play time, some penalty killing time, some more 5-on-5 minutes. I think that’s our situation.

“As soon as we found out, you have to turn the page. We have 20 games left and one thing I’ve learned in this business is you can’t win games with the players you don’t have in your lineup. It’s the end of the subject right there. We have 20 guys that are working hard. They’ll compete hard for us.”

At 70 points, Calgary is tied for third in the Pacific Division with the Los Angeles Kings — but hold the tie-breaker — and trail the Minnesota Wild by three points for the second Western Conference wild-card spot. The Flames remain five points back of the Vancouver Canucks for second in the Pacific, while the Winnipeg Jets hold a six-point edge on the Flames but have played two more games.

Calgary isn’t about to concede their spot without Giordano, though.

“There’s not a lot of people that believe in this team anymore,” Russell said. “But at the same time we’re in a race here and we think we can win and we believe we can win with the players in this room.”

Being counted out is nothing new for the Flames. Many pundits pegged Calgary as a lottery-bound team in preseason predictions.

They’re not being given much of a chance without Giordano, either.

“But we’ve been counted out all year and we started the year trying to get people to start believing in us and then something like this happens,” Colborne said. “We relish that role right now. It’s going to be a tough task, but it’s just another challenge.”