Adirondack salvaged a three-game road trip through Texas by defeating the San Antonio Rampage, 7-3, on Saturday to keep the Flames in the hunt for an AHL Western Conference playoff spot.

The Flames began the past week by dropping a 7-4 decision at Texas before losing falling to the Rampage, 5-4, on Thursday.

But Bill Arnold had a goal and three assists, one of seven different players to find the net, while Kenny Agostino recorded three points in Adirondack’s victory on Saturday. Rookie netminder Doug Carr stopped 23 shots to earn his third win of the season.

The Flames have a heavy schedule this week as they try to climb back into the eighth and final postseason berth. Adirondack is at Toronto and Utica on Tuesday and Friday, respectively, before finally coming back home to host Lake Erie for two games on Saturday and Sunday.

The next four games will likely determine whether Adirondack’s season comes to an end on Sunday, April 19, or continues with a run at the Calder Cup championship.

The Flames (33-28-6-2) head into the week 11th in the conference, five points behind eighth-place Milwaukee, but with two games in hand. Tuesday’s showdown at Toronto is extremely critical because the Marlies are in 10th place, one point ahead of Adirondack.

Garnet Hathaway jump-started the Flames’ offence on Saturday with his 18th goal of the season just 76 seconds into the contest. Defenceman Ken Morrison, picked up an assist on the play, his fourth point in four games since joining Adirondack on an amateur tryout. Max Reinhart extended his scoring streak to four games with a helper on the play. He has three multi-point games during that stretch. 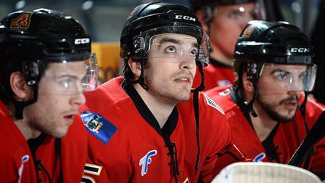 Six minutes later, Emile Poirier made it 2-0 with some fancy stick handling before driving the puck past a flustered Rampage goaltender Sam Brittain. Reinhart and blueliner Brett Kulak assisted on the score.

San Antonio countered early in the second period on Kyle Rau’s first-ever pro goal. But Adirondack came right back as Arnold lit the lamp by redirecting a low wrist shot by Agostino, with defenceman Mark Cundari assisting on the play, to make it 3-1. Less than two minutes later, blueliner Dustin Stevenson brought Brittain’s night to an end as he chased San Antonio’s netminder from the game with a slapshot from the slot to give the Flames a three-goal advantage. Poirier had a helper on this score.

The middle stanza ended with Adirondack in front, 4-2, after Blake Parlett recorded San Antonio’s second goal of the contest.

Midway through the third period, Bobby Butler brought the Rampage to within one, 4-3. Former Adirondack Flame Corban Knight, traded midway through the season in a deal for Calgary forward Drew Shore, had a helper on the play.

But the Flames fought back with three unanswered tallies of their own to seal the outcome. Agostino’s 12th goal of the season made it 5-3, as Brett Cameron earned his first career AHL point with the primary assist, feeding Agostino with a centering pass.

Reinhart and Pat Sieloff picked up empty-netters to round out the scoring for Adirondack.

The Flames triumph snapped a nine-game San Antonio win streak, which the Rampage had extended two nights before with a 5-4 victory over the Flames. In that game, Knight found the twine twice for San Antonio to defeat his former Adirondack teammates.

David Wolf paced the Flames offensively with two goals of his own, one of four players with multi-point performances. Agostino and Mathieu Tousignant also had goals for Adirondack.

Wolf’s power-play marker at 5:19 of the first period made the score, 1-1, after the Rampage had jumped out to a 1-0 lead. San Antonio went up by two before Wolf’s 19th tally of the year, with 1:44 to go in the middle stanza, brought the Flames to within one, 3-2, heading into the second intermission.

However, two more Rampage scores iced the eventual outcome. Tousignant recorded a short-handed goal at 14:04 and Agostino made it, 5-4, on a breakaway with 1:21 left to play. But the Flames couldn’t find the net again before the final buzzer.

The Texas trip started out in Austin where the Flames came out on the short end of a 7-4 decision to the Stars. Poirier had a goal and assist while Hathaway, Reinhart, and Arnold also found the net for Adirondack.

Arnold opened the game’s scoring, but Texas answered two minutes later. Reinhart put the Flames up, 2-1, but once again the Stars shot right back as the score continued to see-saw.

Brendan Ranford’s goal saw Texas go ahead with five minutes to play in the second period and the Stars led the rest of the way en route to the win.

Wolf, Poirier and Agostino are tied atop Adirondack’s scoring chart with 36 points apiece, with Reinhart close behind at 35. Wolf and Hathaway lead the Flames in goals (19) followed by Poirier (17).

Agostino has the most assists (24), although three others have 21 or more — Cundari (23), along with Reinhart and Arnold (21 each). Defenceman Tyler Wotherspoon, just called up to Calgary, has 22.

Wolf has the highest plus-minus rating (plus-11). Poirier and Stevenson are both plus-8. After dropping the gloves several times in recent games, Wolf also leads the team in penalty minutes (152).

Next McDonald not traveling with Islanders 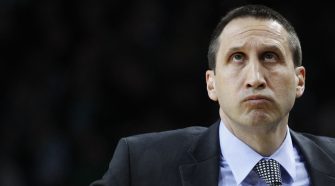