Brad Treliving got the jump on the NHL Trade Deadline.

A day early, the Calgary Flames general manager made his first move in optioning his biggest bargaining chip in Curtis Glencross to the Washington Capitals.

But that might not be the only swap Calgary’s GM makes before the deadline strikes at 1 PM MST. 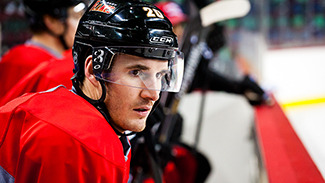 “We’ll see how it goes, there’s lots of talk,” said Treliving, in his first trade deadline after joining the Flames last April. “The market is interesting in the sense that we’ve talked a little bit about trying to get ahead of it. When you get to the deadline it’s like five lanes going into one and things can get jammed up. We’ve seen it throughout the league — I don’t know for sure — I think this is probably the most activity we’ve seen prior to the deadline or the final day that we’ve seen.

“I anticipate there to be a lot of activity in terms of calls and due diligence. Whether anything comes of it we’ll see.”

Calgary fetched a second and third round pick in exchange for Glencross, who spent the past seven seasons in Calgary and was the second-longest tenured player with the Flames.

Pending the market, dealing Glencross might not be the only move Treliving makes.

The market League-wide has been busy, after all.

“It’s been active,” he said. “It’s been more active than I thought it would necessarily have been. In having said that, once a piece goes – we saw a couple of big deals a couple weeks ago – and now everybody starts to get in the game and things have moved quickly from a seller’s perspective, we’re very happy with the return here.

“It comes back to once you’re in, anything can happen.”

There are a few directions Treliving can take moving forward.

Like Glencross, the first-year executive could try to pull more draft picks from the pool.

“We’re trying to navigate parallel paths. We’re not going to impact the long-term future of his franchise, but you also want to recognize what the players have done to put themselves in a position where they’re in today, and if you can help that.

“If there’s a cost that makes sense, we’re exploring that.”

Next Prospect Of The Week: Sam Bennett