The marathon has come down to a sprint.

With the NHL Trade Deadline in the rearview mirror and exactly 20 games remaining in the regular season, the Calgary Flames are in a dash to make the Stanley Cup Playoffs for the first time since 2009.

It’s a race without captain Mark Giordano, though, who will miss the remainder of the regular season following a torn biceps muscle. 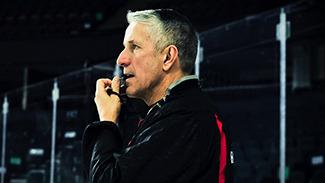 “As soon as we found out, we have to turn the page,” Flames coach Bob Hartley said. “We have 20 games left and one thing I’ve learned in this business is that you can’t win games with the players you don’t have in your lineup. It’s the end of the subject right there. We have 20 guys that are working hard. They’ll compete hard for us. We’re going to spend our focus on those guys.”

At 70 points, Calgary is tied for third in the Pacific Division with the Los Angeles Kings and trail the Minnesota Wild by three points for the second Western Conference wild-card spot. The Flames remain five points back of the Vancouver Canucks for second in the Pacific, while the Winnipeg Jets hold a six-point edge on the Flames but have played two more games.

Defenceman Kris Russell said his team is prepared to run without Giordano’s services Tuesday against the Philadelphia Flyers.

“There’s a lot of talk about [Giordano] and those kind of things, but we’ve got a lot of capable guys in this locker room and it’s going to up to us to step up,” he said. “We’ve got a hungry team that has put themselves back in a playoff hunt. We know they’re going to come hard, they’ve got a lot of skill, but it starts with us. Simple plays getting pucks deep, getting pucks to the net, and really playing the Flames style.”

There are many pundits who believe Calgary’s playoff chances are shelved alongside Giordano.

Russell isn’t among them.

“There’s not a lot of people who believe in us anymore,” he said. “But at the same time, we’re in a race here. We think we can win, we believe we can win with the players in this room. It’s a big game tonight. It’s a big two points and that’s what we’re looking forward to.”

Drew Shore is hoping to help factor into two points at Wells Fargo Center. The 24-year-old was recalled from Adirondack of the American Hockey League on Monday and is expected to suit up for his 69th career National Hockey League game.

Though he’s played just one game with Calgary since being acquired from the Florida Panthers in exchange Corban Knight on Jan. 9, Shore is well aware of raised expectations — both of him and of the team.

“I think it’s heightened a little bit,” Shore said. “Obviously they play the same systems (in Adirondack) and the coaches down there have really worked with me, mostly on getting used to the systems. Obviously they’re a little bit different style. I’m thrilled to be back here. 20-game playoff race — you couldn’t ask for much more as a player. I’m really excited.”

Shore has three goals and seven points in the 12 games since making the move to Adirondack from the San Antonio Rampage.

“Every player that we get called up, they always come ready,” Hartley said. “The biggest question is how well can they handle the NHL, how quickly they can contribute. Time is not on our side. We need some performances.”

When acquired, Shore was two NHL games away from losing his waiver-free status.

Having previously played one of those games, Shore will have to clear waivers in order to be assigned back to Adirondack should he suit up against the Flyers.

It’s a status, Shore admits, that he’s well aware of.

“I think it’s affected the last year of my hockey career,” said Shore. “It’s definitely something I know about. It’s something that has been affecting me for awhile now so if I do get in the game, I’m just going to play as hard as I can. I think I’ve grown a lot as a person and player from it. It’s obviously a difficult situation that as a player you don’t want to be in, having that waiver thing holding you back. I think I’ve grown a lot and I’m excited.

“It’s been a long time trying to get those two games but it’s something I’ve been looking forward to and made me even hungrier. You can’t take a day for granted up here so I’m excited.”

David Schlemko has finally joined his new teammates. The waiver-wire pick-up took Calgary’s morning skate — his first as a member of the Flames.

But the 27-year-old isn’t expected to suit up.

“He’s not going to play tonight,” Hartley said. “He didn’t skate for a few days. But after this, it’s an open game. He has the answer and the six defencemen in the lineup, they have the other part of the answer. Right now, freebies don’t exist in the Calgary Flames organization.”

-Hartley on the trio of Shore, Emile Poirier and Michael Ferland

Tonight’s game will be broadcast on Sportsnet West (TV) and Sportsnet 960 The FAN (radio). Game time is 5:00 PM MT. Channel numbers for Telus, Shaw, and Bell users can be found on our Broadcast Schedule page.

Next Flames not willing to fold with loss of Giordano