“Where we go away today from where we came in two days ago in terms of our defence depth chart, I think we’ve helped ourselves a lot,” said Treliving, who orchestrated a trade to bring in Hamilton at the expense of three draft picks, including Calgary’s top selection, 15th overall.

“We think we addressed some organizational needs. But the reality is the months and years ahead are going to determine how successful today was. We obviously want to take that approach, but we leave here today with some players that we think have a chance.”

Calgary sacrificed their first three picks to land the 22-year-old Hamilton, who led all Boston Bruins defencemen with 32 assists and 42 points.

Scouts, who entered the weekend with nine picks, were understanding. In fact, the Flames had Hamilton high when he was selected in the first round (No. 9) by the Bruins in 2011.

“The scouting staff is really excited about getting a guy like Dougie Hamilton. It’s not even an issue for us when you put a 22-year-old defenceman who’s done what he’s done in the lineup right away. We look at it selfishly like he’s our first pick and he’s going to be in our lineup next year and for years to come. We’re really happy about how Friday played out, actually.

“When Brad vetted us after he’d made contact with Boston about the possibility…we had him very high on our list his draft year. All the scouts were excited about a young guy like this.”

Treliving relayed a similar message from the scouts.

“Our scouts are really happy and I’m happy for them,” Treliving said. “It’s tough to sit through seeing names come off the board. Think about it. Going back to March 3rd, nine picks, four in the top two rounds, and then you make a deal, which we love our deal with Dougie, but the guys in the field are looking at picks coming off the board. They’re happy with the net out. I’m quite cautious and I think time will tell. A draft is judged by the calendar, not a stopwatch. We leave here today like a lot of teams, excited with what we did. We think there’s a high ceiling for these players.”

Among those are Calgary’s top two picks in Rasmus Andersson and Oliver Kylington.

Andersson, who spent the 2014-15 season with the Barrie Colts, was Calgary’s top pick (No. 53) in the draft. Treliving made another move, sacrificing picks No. 76 and 83 to secure the 60th overall selection to take Oliver Kylington of Farjestad.

“We like both players,” Treliving said. “When we made the deal for Dougie the other day, you go back into the room last night and try to re-arrange the names and see. We were actually trying to get more picks. If you see, it was a funny draft in the sense that we were one of the few teams to move up. There were a few of those deals but the majority of those teams were trying to move down and get additional picks.

“As the names started coming off the board, and it’s cliché-ish…I’m one of 30 that says ‘Oh, I can’t believe he was there’ but…the room for growth, the ceiling for these guys is high. In both cases, they’re skilled players.”

The Flames added Calgary Hitmen forward Pavel Karnaukhov with their next pick, No. 136.

He came on a ringing endorsement from Hitmen president of hockey operations and alternate governor Kelly Kisio.

“At that pick, too, there were a number of names,” Treliving started. “We like the size, the compete factor. We spent a lot of time with Kelly Kisio, Mike Moore and the Hitmen staff in getting an insight on the player. This is a real competitive kid, a real character guy. Adjustment for those European kids coming over for their first year in North America, it’s an adjustment. This is a big horse. Work to do there, but we think there’s good upside.”

Though they project differently, it’s a similar upside that Treliving sees in Andrew Mangiapane.

He was a can’t-miss for Treliving.

“Speed and skill,” he said. “High, high-end skill. You look at our game as it’s moving along here. There’s an emphasis on skill. We think we checked a box as we went through the draft in that area, wanting to add skill to our lineup and a competitive guy. He does all the skill things. He’s a dangerous player with his speed, real good IQ, can make plays, over 100 points this year. We think we added some skill there.”

With the Flames’ final pick (No. 196) in 2015, Calgary selected Riley Bruce of the North Bay Battalion.

“Physically he’s got a lot of work to do,” Button described. “Strength. He’s a tall kid and he’s thinner. We want his mobility to increase, hand skills, puck skills to increase. He’s a project physically but he’s got a good frame of mind.”

So too do the Flames following the draft.

“We’re better today than we were when we got here on Tuesday,” Treliving said. “That’s the object of the game. We’ll dust ourselves off and get ready for the next task.”

Next What Scouts Say: Pavel Karnaukhov 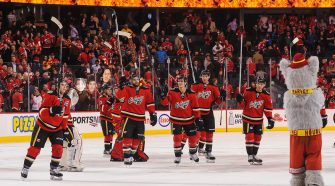