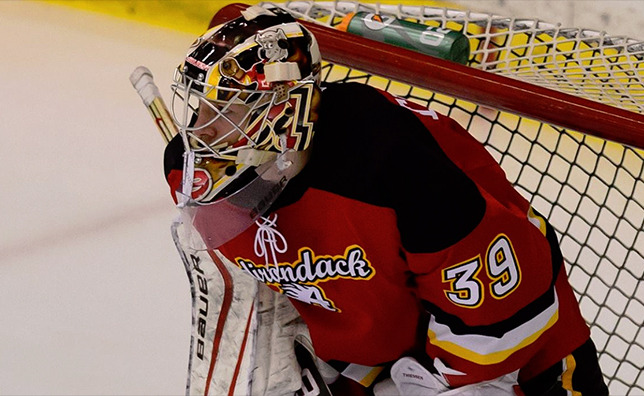 CALGARY, AB — Goaltender Brad Thiessen has jumped from one playoff chase to another.

Looking to help guide the Adirondack Flames to a berth in the American Hockey League playoffs, Thiessen was recalled to the NHL on Sunday to join the Calgary Flames in their bid to make an appearance in the Stanley Cup Playoffs.

Brad Thiessen“It’s definitely exciting to be able to come here having followed what the team has been doing and the run they’ve been on and a chance to make the playoffs here this week with three games,” said Thiessen, who joined the team via San Antonio on Sunday afternoon. “I’m just excited to be a part of it and help out wherever I can. I know there are a lot of other guys up here from Adirondack right now and they’ve said it’s definitely a great atmosphere and experience right now. I’m looking forward to being a part of that.”

In 32 games with Adirondack, Thiessen has a record of 10-14-7 with a 3.02 goals against average and .905 save percentage. He’s carried the bulk of the load for Calgary’s minor league affiliate after fellow netminder Joni Ortio sustained a high ankle sprain, sidelining him since late February.

The Aldergrove, BC native has started all but four of Adirondack’s 19 games played since and has earned the promotion to Calgary.

“It’s what you’re working towards and working towards is a chance to be back here,” Thiessen said. “Unfortunately sometimes it happens at the expense of other guys getting hurt but I’m excited to be back up in the NHL and with a team fighting for a playoff spot.”

He’s not the only Adirondack airlift to help Calgary’s push along.

Thiessen is joined by the likes of Markus Granlund, Drew Shore, Tyler Wotherspoon, Michael Ferland and Corey Potter as players currently on the Flames roster who, with three games remaining in the season, are hoping to help Calgary to their first playoff appearance since 2009.

The familiarity, Thiessen admits, is helpful.

“It’ll be nice to have some familiar faces to see,” he said. “It’s been fun to follow the guys you’ve been playing with down there up here playing and playing well and making contributions and being able to join them will be fun.”

A late-season playoff push is not a situation that Thiessen is entirely unfamiliar with.

As a member of the Pittsburgh Penguins organization in 2011-12, Thiessen stepped in when backup goaltender Brent Johnson sustained a late-season injury.

Thiessen won his first three NHL starts and finished with a 3.72 goals against average and .858 save percentage.

“It was definitely a great experience,” he said. “Those games that I played in the NHL were something that I worked towards. Thinking back, it was a great time. I can definitely draw from those experiences and times when I was there. I was able to be around teams that have been in a playoff chase and have gone all the way. Hopefully it’s something similar here.

“At the need of the day I have a job to do and I have to be ready to jump in if I’m ever needed and stop the puck. These guys have done a great job of putting themselves in a position to have this last week of games really mean something. If I can contribute in any way I’ll be ready.” 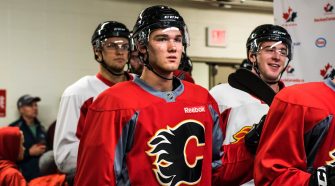