Tips For Unlocking A Cell Phone

After trading for Hamilton’s rights from the Boston Bruins at the 2015 NHL Draft on Friday, the Flames announced a multi-year extension for the pending restricted free agent Tuesday.

“I didn’t know I was going to be a Flame until, I guess, today, or when I was traded to them,” Hamilton said in a conference call. “It’s something that your life can change pretty quick and it’s part of the business and everything. For me, I’m looking forward to it. I’ve heard a lot of good things and some text messages from players around the league and stuff like that, that have told me how nice it is there. I’m going to fit in well.

“There’s a lot of things that continue to excite me about the organization, the team and the city. It’s all just building for me. Unfortunately there’s still a lot of time left in the summer and I can’t go there and start playing right now.”

“One of the things we talked to our scouts about is in this year’s draft, as good of a draft it was, and you look at Dougie’s age, and he’s in some ways three or four years older than some of the players drafted, if some reason Dougie Hamilton was available to be selected on Friday night, where do you think he goes?” Flames general manager Brad Treliving said.

“We picked 15. Do you think he gets to 15? He’s one of the first players that would get called off the board. That to me, when you talk about the age of the player, adds some context, so we were more than comfortable parting with the package that we did. I’m real happy that we’ve got him under contract for six years and part of our core moving forward.”

A seemingly impromptu exit from the Bruins organization and a report in the Boston Herald suggesting Hamilton was disliked by his teammate’s sparked rumors about the defenceman.

“I don’t want to talk about the past too much. I enjoyed my time there,” he said. “Right now for me, it’s all about my excitement for the future. The last couple of days I’ve just been really excited about this new opportunity and being a Calgary Flame and for me, it’s just really exciting. I’m not really thinking about the past right now. I’m just looking forward to getting to Calgary and starting a new chapter in my life.”

“I know there’s been, in my mind, a lot of crap written here in the last little bit,” he said. “I’ve been asked a lot the last couple days and I don’t want to give it any type of response but it deserves one based on the questions I’ve been asked. There’s a lot of things that keep me up at night. The type of person Dougie is, the type of teammate he is, is not one of them.

“We do a lot of research in terms of the player on the ice, the personality. A big part of our success, I feel, is the culture and the people we have here in Calgary. What makes us excited about the deal is not only the player we’re getting but the person we’re getting. There has not been an ounce or a calorie wasted in terms of worrying about the player.”

Treliving added he liked the addition of Hamilton for “not only what he brings to us on the ice but the personality and the teammate that he’s going to be off of the ice.”

Hamilton immediately bolsters a position of strength for the Flames.

Calgary captain Mark Giordano finished sixth in Norris Trophy voting in 2014-15, including one first-place vote, six second-place votes and 11 third-place votes, after setting new career highs in assists (37) and points (48), despite missing 21 games due to injury.

“To add a player like Dougie into that mix…the other piece you have to look at this is not only what Dougie brings, but how it complements the rest of the group,” Treliving said. “To me this gives another tool in the toolbox to our coaching staff to distribute minutes.

“As much as Dougie is going to be a big part of our team, the responsibility and the minutes he can log, to me that makes Mark Giordano a better player, it makes TJ Brodie a better player, Kris Russell a better player, Dennis Wideman, Deryk Engelland, on and on. It’s not only what the player does individually but its’ the sum of the parts that also gets better.”

With Hamilton’s contract done, Treliving will refocus on an extension for Giordano, who has one year remaining on his contract before becoming an unrestricted free agent in the summer of 2016.

“Mark’s our captain and our leader and we’re going to work away at getting that done,” Treliving said. “This situation with Dougie came up. You never know when deals are going to consummate. We pursued this for some time, obviously, with the draft being a mile marker in a sense when you talk about picks being involved. There was time sensitive currency on the table so that got done. We spent the last couple days getting his contract done.

“No update on the talks with Mark other than it remains a priority for us to continue and work away at it and get to a good conclusion.”

Next Hamilton eager to get started with Flames 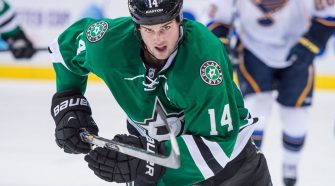