Ramo’s save percentage on the road, .938, bests the likes of Carey Price (.932), Corey Crawford (.931) and Henrik Lundqvist (.928) top top the National Hockey League, while his 1.87 goals against average under the same set of circumstances is second to none.

But even he can’t quite pinpoint a reason as to why.

“I don’t know. Maybe we play differently at home,” Ramo said with a shrug. “Many things affect it. I’m just feeling comfortable playing. It’s the same on the road.

“I try to prepare myself the same way every game I play and not try to think about the results. Now we’re getting results, getting saves. I don’t try to think about it too much. I just try to prepare the same way every game and try to do my best. That’s the only thing I can affect. What happens in the game happens. I just try to focus and try to be my best all the time.

“I try not to take things too low when things go wrong and things too high. I try to just do my thing. I really can’t say my confidence is higher than any other point this season.”

Though he’s split his decisions, Ramo has stopped 126 of 130 shots for a .969 save percentage through the first four games of a season-high seven game, make-or-break road trip through the Eastern Conference.

“Karri had some great runs for us,” Bob Hartley said. “He’s a competitor. Right now he’s in the zone. He’s finding pucks. I feel that, though as a team, we’re doing a good job of boxing out guys on the outside. We’re not allowing rebounds. As an NHL goalie, they always want to see the first shot and he does but he’s coming up with some huge saves for us.”

But even Hartley isn’t sure to buy into the road reputation Ramo is establishing. 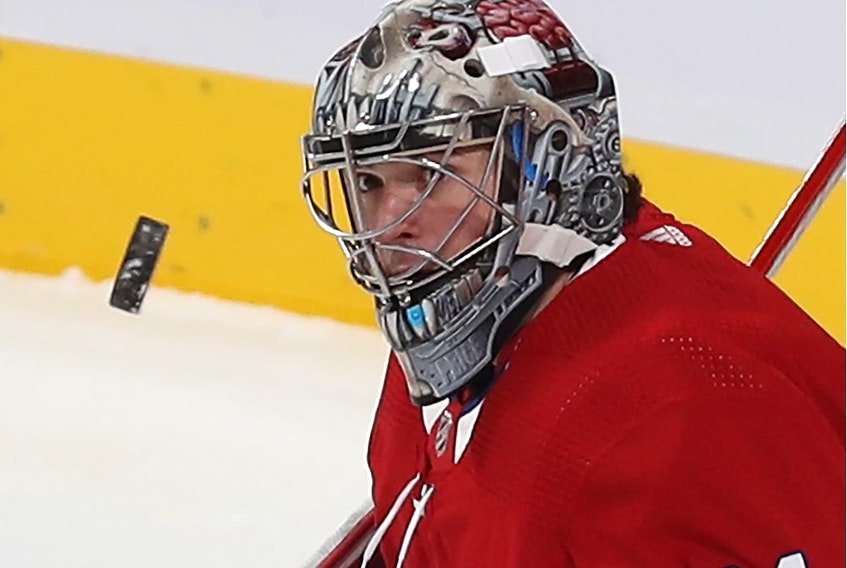 “Sometimes it can be coincidence,” Hartley said. “I don’t attach too much importance to those numbers. As long as we play well, that’s the number one thing that matters to me. When your best player is your goalie you know that you’re going to have a chance to win every game.”

He is, however, pleased with the run he has seen out of his goaltender through stops against the New York Rangers, New Jersey Devils, New York Islanders and Philadelphia Flyers.

“That might just be the way it happened,” Brodie said. “He’s a great goalie no matter where he’s playing. He’s just one of those guys that he’s good with his hands and he knows where he wants to put the puck when he’s making a save. Just his control with rebounds and find the puck through traffic is great.

“He’s playing great for us. Every game he’s played he’s given us a chance to win.”

While Ramo has stepped up in the crease, defenceman Deryk Engelland is picking it up in front of it.

Paired with Brodie, Engelland played to a season-high 22:49 in Tuesday’s 3-2 overtime win against the Flyers in the absence of captain Mark Giordano, who’s season has ended as a result of a torn biceps tendon sustained against the Islanders last week.

Hartley said it’s the best he’s seen out of the 32-year-old blueliner since joining the organization.

“Huge. That’s [Engelland]’s best game with us,” Hartley said. “Early in the year we had him in the top-4 and obviously a new guy in the organization, it kind of took a little time to find his way and then obviously when you’re not a top-4 your minutes will go down. That’s on every team.

“Last night he sure stepped up and that’s great. He’s a great leader. He’s a great person. He’s worked always hard. It just shows you sometimes that he might not have got the minutes he wanted but when you keep a fresh, positive attitude and you work hard, when the door opens he jumped in. He was a big part of our team last night.”

“I would definitely assess the same,’ Engelland said. “Obviously there were a few mistakes but overall I thought I brought a physical presence and tried to move the puck quick and well. I’m pretty happy with the overall part of my game.”

So too was his partner.

“He’s played well the last couple of games,” Brodie said. “He’s an easy guy to play with. He’s always in the right position and he’s always open for the puck. You can always count on him to make the smart and safe play and if I do jump up I know that he’s back and he has the ability to cover up for me.”

Prior to Philadelphia, Engelland had cracked the 20-minute plateau just once this season and has averaged 12:35 of ice time through 57 skates this year.

But without Giordano, the 6-foot-2, 215-pound defenceman has been the first to inherit big minutes.

“You lose a guy like that and there’s going to be opportunities for other guys to step in and play, and I want to do that,” Engelland said. “I know I’ve played more minutes before and I can do it. To step up and try to pick up some of the slack with [Giordano] being out is what I’ve got to try and do and everybody else on the team has to want the same.

“Any time you’re playing and play lots, it’s an added bonus, but you’ve got to come and play your game to get rewarded.”

“For me, I’m very proud to be able to name [Wideman] an alternate captain because I think he’s grown a lot in this organization in three years. He’s changed a lot, both on and off the ice. He’s a great leader for us. He gives us great minutes. He’s playing real well. I really believe that I don’t know where we’d be in the standings without Dennis Wideman this year because he really stepped up his game. Everything around his game and around himself this year has been very positive. It’s a good move.”

NOTES: Wednesday’s skate at Jack Parker Arena, the home of Boston University, was optional. Among the participants were rookies Emile Poirier and Michael Ferland and veteran Jiri Hudler…David Schlemko also skated and isn’t expected to draw into the lineup against Boston…Katie and Matt Stajan welcomed baby Elliot Emerson to the world March 2nd. Stajan is expected to join up with the team in Boston but is not expected to play, either.

Next Steinberg’s Slant: The best of both worlds