A quick glance at the Flames schedule and it appears that the team is heading into their fourth game on a five-game road trip.

That is not the way the team views it.

Bob Hartley and his coaching staff broke down the 2014-15 campaign into seven-game segments and have adhered to that breakdown when working with their players.

On Monday, the team wrapped up Segment 11 with a 5-3 win in Game 7 and are heading into Segment 12 — a five-game sprint, as Hartley has dubbed it — on Thursday in St. Louis. 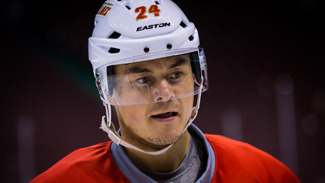 “We told the boys that had finished our three-game road trip with two wins out of three and now we’re starting a two-game road trip. The day off yesterday was great. It was beautiful outside, right outside the ballpark, so I’m sure that guys got some fresh air. It was a good day to relax.

“Today, the boys were sharp at practice. We had good legs. We were jumping. Tomorrow, it’s another big test.”

Since training camp, Hartley has been preaching the importance of winning each of these seven-game series and how taking care of their own business would ensure they would be in the playoff hunt when the stretch drive rolled around.

The method has worked out.

“I told them, ‘Make sure we’re good in those seven game segments and you’ll see that we’re going to be in the picture,'” Hartley reminisced.

“Not that I’m a great guy with math or anything but I knew that by being good in our seven-game segments — despite the fact that we had that awful one, eight-game slide — we would be right there.”

With a 42-28-7 record and 91 points, the Flames sit third in the Pacific Division and sixth in the Western Conference. They have the Los Angeles Kings nipping at their heels in the division and they’re one point ahead of Winnipeg, who holds the final Wildcard spot in the West.

Hartley views this neck-and-neck battle for postseason positions as an incredible learning experience for his crew, particularly the youngsters in the group.

“This is the best time of the year. We put ourselves in a situation where we can enjoy those games, where we can learn about the process of being a playoff team. There’s no victories yet. You saw the guys at practice — they’re focused, they’re on the job, they understand our situation.

“What’s most impressive is that we have lots of young players that [are] growing in our situation. They’re not scared, they’re not rattled. They’re going and they’re going hard. It has been lots of fun.”

Defenceman Kris Russell did not skate on Wednesday, taking the day off for personal reasons, but will play tomorrow night.

The Flames ran line rushes during their hour-long skate at the Scottrade Center but the coaching staff isn’t fully committed to them quite yet. They will take some time to determine what their final lineup will look like tomorrow night.

“We’re getting pretty healthy so we have lots of options,” Hartley stated. “We’re going to re-visit this tonight and tomorrow, we’ll be set on our lineup.”

Hartley also announced that Jonas Hiller will get the start in net in tomorrow’s match-up with the Blues.

“Hills has played very good, given us two big wins in two nights,” Hartley said of the decision. “Both guys can win us games. Last week, Karri gave us a good streak. Right now, Jonas is getting the job done.”

THE BOYS AND THE HUDS

The pair combined for 42 points last month and are the Flames’ leading scorers, with Hudler tallying 71 points through 74 games and Gaudreau collecting 60 points in 76 games.

The pair and their pivot, Sean Monahan, have shouldered a lot of responsibility throughout the course of the season and show no signs of slowing down as the regular season winds down.

“Those guys are playing the game the right way and that’s why I don’t hesitate one second to play them a lot,” Hartley said. “Right now, the schedule is kind of working in our favour. There’s no more two games in two nights, travel is good. Expect to see a lot of them.”

Monahan has loved centering the two wingers this season and has felt their game has progressed as the year as rolled along.

“It’s fun. Hockey is always fun but it’s even better when you’re doing well and winning hockey games,” Monahan said. “It’s fun to play with Johnny and Huds out there. We’re making plays and we’re enjoying it.”

“They’re special on the ice. They make plays, they want the puck, and right now, we’re confident as a line.” – Sean Monahan on playing alongside Johnny Gaudreau and Jiri Hudler

The Flames next stop on their 10-day trip is the Scottrade Center in St. Louis on Thursday night. They face off against the Blues at 6:00 PM MT. The game will be broadcast on Sportsnet West (TV) and Sportsnet 960 The FAN (radio).

@NHLFlames will be live-tweeting the game along with providing plenty of pre and post-game content. Fans can also follow along on Twitter using the hashtag #CGYvsSTL. 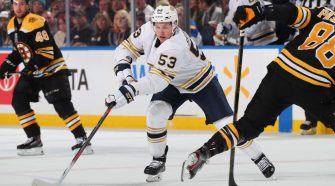