CALGARY, AB — Whether or not those in charge of the National Hockey League schedule had a crystal ball, Calgary Flames coach Bob Hartley isn’t sure.

But he’s a fan of their work nonetheless.

With their Stanley Cup Playoffs fate to be decided over the final three games of the regular season, the Flames will see two of the teams they’re neck-and-neck with to close out the year.

“It’s a great schedule,” Hartley said after Calgary’s skate Monday. “I don’t know who made the schedule but this guy has a flair for drama, but at the same time it’s great. On our side we had a great practice today. We prepare for Arizona. Once tomorrow night’s game is going to be over we’re going to start focusing on LA. That’s going to be the way all the way down to our final game against Winnipeg.

“We’re not getting too far ahead. We’re focused. We’re on the job. Our players allowed us all year to put us in this situation. We’re not going to change our mindset right now. Those guys have been unbelievable.”

Entering action Monday, the Flames are third in the Pacific Division with 93 points, one up on the Los Angeles Kings and two behind the Vancouver Canucks for second. The Winnipeg Jets are also one point behind the Flames and are in a tie with Los Angeles for the second wild card entry into the playoffs from the Western Conference.

It’d be understandable if the Flames’ attention lied beyond the Arizona Coyotes and ahead to meetings with both the Kings and Jets. The Coyotes sit last in the Western Conference with a 24-47-8 record, with 10 of those wins coming in 42 games in 2015.

But it’s not allowed.

“We were wearing those shoes last year,” said Hartley of being relegated to the spoiler role. “We were having fun with it because there’s zero pressure. Teams are calling up a few kids from the American League that they want to prove to their organization that they deserve to be in the NHL next year. You need to prepare for them as any important game.

“That was our message to our guys this morning. During the entire practice, during the meeting, we only focus on Arizona. That’s where it is. Every game is a must-win situation so we can’t get caught looking too far ahead.”

The ‘one-game-at-a-time’ mantra has been one preached by Hartley all season.

So too has keeping a light mood around the team.

With three games in five days to determine the result of seven months of work, the Flames coach is trying to keep that atmosphere consistent.

“You saw them. They’re having fun,” Hartley said. “We don’t feel the pressure. From a coaching staff we’re trying to keep it as loose as possible. We don’t change a thing. From Day 1 we’ve been very consistent in our approach, whether it’s the video meeting, the practices, game meetings, one-on-one meetings. We didn’t change anything because there’s nothing to be changed.

“We’ve had great commitment from those guys all year. It’s business as usual for us. We have an 82-game schedule and now there’s three games left. We challenged ourselves at training camp. We wanted to play those final games to mean something.

Jonas Hiller is ready to carry the ball.

Forced into action just 58 seconds into Calgary’s 4-0 win against the Edmonton Oilers on Saturday as a result of a lower body injury to starter Karri Ramo, the 33-year-old netminder is ready for the bulk of the load for the Flames’ final three games of the season.

“I feel good about my game right now,” said Hiller, who didn’t allow a goal in 59:01 of relief after replacing Ramo, eclipsing the previous NHL record set by Martin Gerber (55:45) on Oct. 22, 2005 when he stopped 14 shots in relief of Cam Ward in a Carolina Hurricanes victory against the Washington Capitals.

“I want to prove it every night again. Our big goal is to make the playoffs and if we want to do that, I have to play at my best. Everybody has to. At the same time I try to do that every night. That definitely doesn’t change too much.”

Having both available had been a luxury for Hartley.

“We’ve said all along the way that we have two No. 1 goalies,” he said. “It doesn’t change anything to our plan. Right now we have Brad Thiessen with us also. Everything is good.

“Here’s a real classic example of why you need good goaltending in order to be fighting for a playoff spot. Those two guys have been unbelievable for us all year. We’ve basically played them…they have plenty of great streaks, whether it was Karri or it was Jonas. Right now Karri is in the medical room. We go with Jonas.”

Recalled from the Kingston Frontenacs of the Ontario Hockey League on Friday, Sam Bennett is itching to get his first taste of NHL action. He’s ready, when and if he’ll get the chance.

He’s already had to wait, though. The 18-year-old was a scratch against the Oilers on Saturday and could also take a seat when the Flames welcome Arizona on Tuesday.

“We brought him in as an additional option,” Hartley said. “He’s learning tremendously right now. You look at our track record with kids in the past years, I think that we’ve worked with a plan and we have a plan for Sam.

“Is he going to play? I can’t answer this question. Right now our focus is on winning our final three games. Here’s a young prospect that is unbelievably talented but didn’t play a game until early March. Lets not get too excited over here.

NOTES: Ramo remains day-to-day…Thiessen joined the Flames for practice Monday…Raphael Diaz, who sustained a lower-body injury Thursday, did not skate…Bennett skated on a line with Michael Ferland and Drew Shore in practice.

Previous McDonald not traveling with Islanders

Next Prospect Of The Week: Emile Poirier 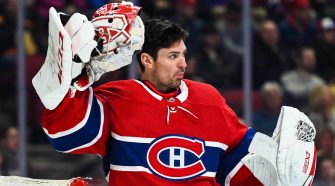