David Schlemko’s endured some taxing travel and a couple of bag skates since being plucked off waivers by the Calgary Flames. Now, he’s set to take a spin in game action.

Schlemko, picked up by Calgary four days ago, will make his Flames debut Thursday against the Boston Bruins.

“Its huge for me,” he said. “This year hasn’t gone the way I wanted, especially lately. I’m going to take advantage of the opportunity.”

Schlemko started the season with the Arizona Coyotes but was placed on waivers in January. The Dallas Stars optioned his rights, but placed him on waivers last week.

With an injury to captain Mark Giordano, Calgary came calling.

And though he’s yet to suit up for the Flames, the 27-year-old knows what to expect.

“It’s a hard working team,” said Schlemko, who expects to be paired with Raphael Diaz. “I know from playing against them they’re always a hard team to play against. I’m looking forward to being a part of that.

“I’ve had a few days skating and I needed that to kind of get my legs back under me. As far as the systems go I think we keep it pretty simple here, we don’t try to reinvent the wheel so I don’t think that should be a problem jumping in.”

It’s been a long road — literally — to get the former Medicine Hat Tigers defenceman to his new teammates. Foul Philadelphia weather kept the 6-foot-1, 190-pound blueliner from joining the team immediately after the claim.

His flight delays may have slowed Schlemko, but he’s quickly being brought up to speed by coach Bob Hartley.

“We have videos and obviously not as much time as we would have liked but it’s the time of the year where time is against us,” Hartley said.

Ready or not, Hartley admitted Schlemko will give the Flames blue line a unique look.

“For probably the first time in the season we have a chance to have three pairs of defenceman with a left and a right (handed shot), which we believe that there is a certain importance to get on the ice,” he said. “It’s his first game, a skilled defenceman can move the puck and we’re looking for this.

Schlemko’s last game came as a member of the Stars on Jan. 31 against the Winnipeg Jets, one of just five appearances he made with Dallas. He added 20 more skates in with the Coyotes.

“It’s the fun part of hockey, get the butterflies going a little bit,” he said. “But once you get a couple of shifts under your belt it’s just another game.”

While Boston will be the host to Schlemko’s first game with Calgary, facing the Bruins holds a different significance for a pair of Flames.

Joe Colborne was originally drafted by Boston in the first round (No. 16) in the 2008 NHL Entry Draft, while Dennis Wideman played 256 games for the Bruins over parts of four seasons.

The city still holds some memories to the sentimental Wideman.

“I really enjoyed my time here and I still know a lot of guys on this team,” said Wideman, who twice hit the 13-goal plateau — his career high — while with Boston. “The core group is still here from when I was here. Coming back here, it’ seems like nothing’s change. It’s a great city. I loved it here. I enjoy coming back here.

“It always is (special),” he said. “It’s the team that drafted me. I have a lot of good memories here, a lot of firsts that happened. It’s a good experience every time.”

Wideman and Colborne weren’t the only pair to reconnect with the city. In the final leg of the Johnny Gaudreau Show, the 21-year-old rookie found some downtime to visit some Boston College buddies in advance of his game against the Bruins.

Those memories and more flood back to Gaudreau.

“A ton of memories,” the Carneys Point, NJ native said. “Just last night I was in the dorm with all the guys playing Xbox with them for two hours. It was just like I was part of the school again. It was great to be back there and see a lot of the guys. Skating at the Garden today brought back a lot of memories… three Beanpot championships and a Hockey East championship.”

Gaudreau has been the main attraction through the opening leg of Calgary’s season-high seven-game road trip through the Eastern Conference.

Among the stops included New Jersey and Philadelphia, Gaudreau’s backyard.

Boston, though, has a different feel.

“It’s great. I was lucky enough to play in the playoffs in my first couplaudreau Show, the 21-year-old rookie found some downtime to visit some Boston College buddies in advance of his game agae of years. You realize that it’s not going to happen every year so it would be great to have a good stretch run here and get into the playoffs. As far as being an Alberta boy, it’s great. It’s amazing the people that come out of the woodwork since I got picked up here a few days ago. It’s exciting.”

-Schlemko on joining the Flames

Tonight’s game will be broadcast on Sportsnet West (TV) and Sportsnet 960 The FAN (radio). Game time is 5:00 PM MT. Channel numbers for Telus, Shaw, and Bell users can be found on our Broadcast Schedule page.

The Calgary Flames official app is another way to follow along with the action, with goal and period summary notifications. The app is free and available to download on iTunes and Google Play. 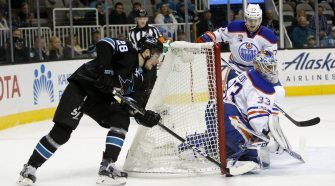