Flames captain Mark Giordano is expected to undergo surgery later this week to repair a torn biceps tendon in his left arm and will miss the remainder of the season, general manager Brad Treliving announced Monday.

“It’s a tendon tear…a complete tendon tear,” Treliving said. “[Giordano] looked at every avenue to not go through that procedure and see if he could keep playing and see if there was a time that it settles down over time. We’re not going to risk anything with him. There is no opportunity for him to play. This is the only measure that’s left.

“Obviously that’s not the news we wanted to hear but that’s what will happen.” 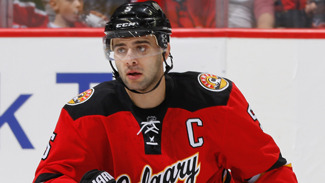 Giordano was injured last Wednesday in the late stages of Calgary’s 3-1 win against the New Jersey Devils after getting tangled up with the stick of Devils forward Steve Bernier.

He took the warm-up two nights later in Calgary’s game against the New York Islanders but did not play in the eventual 2-1 loss.

Recovery time is expected to be between four and five months.

“We know that this was the potential situation, just like all of them,” said Treliving, in his first year as GM with the Flames. “You see injuries where there’s the potential of having it corrected through surgical procedures, whether you have to do it now or it can wait. We discussed all these options for a while to see if there was an opportunity. We knew there was going to have to be a surgery done, whether it was now or at a future date. That was something we were exploring over the last couple of days.”

At 70 points, the Flames are tied for third in the Pacific Division with the Los Angeles Kings and trail the Minnesota Wild for the second Western Conference wild-card spot into the Stanley Cup Playoffs. Calgary remains five points back of the Vancouver Canucks for second in the Pacific, while the Winnipeg Jets hold a six-point edge on the Flames but have played two more games.

Giordano has played an integral role in helping the Flames battle to get into the playoffs for the first time since 2009.

“He was devastated,” Treliving said. “It’s devastating for all of us. The next message to the team is this is what we’ve been dealt. We respond one of two ways: you hang your head or you pick your head up and you say ‘what’s next’. Mark’s situation or Mark’s reaction, he hasn’t been in this situation with this team for a long time when we’re pushing at this time of year. This is when the games are fun. This is our heartbeat of our team.

“He was, as you’d expect Mark to be, he was devastated by the news. We talked to him a lot and we’ve tried to cheer each other up. Haven’t done a great job of it but we’re getting there. This is not what he wanted but this is what it is and so we’ll deal with it.”

At the time he was injured, Giordano’s 48 points were tied for the lead among NHL defensemen and tied for the lead on the Flames. Giordano had 11 goals, a plus-13 rating and averaged a team-high 25:10 of ice time per game.

Treliving wasn’t able to replace that on deadline day.

“You don’t replace Mark Giordano,” Treliving said. “You just don’t do that today. The urgency to do something, you have to match that with the calmness of not overreacting and all of a sudden doing something that you’re making a big mistake. To think that Mark’s leaving our lineup and we’re going to go out and replace him today, that’s fool’s gold. We pushed very hard up until the buzzer to see if there was a fit to help offset that loss. You don’t offset that loss.

“Whether that’s a week, a month, whatever. You’re not going to fill the hole, but how do we patch the hole. We’ve been active in doing that for what has been three or four days. We added some depth with David Schlemko. This is not a Mark Giordano replacement. To find a fit there, we just couldn’t do it at a cost. You see some of the deals that have been made. You’ve got to be very careful that you don’t overreact.

“Could we have added a player to fill some of that role? Absolutely. The price would’ve been huge and for something that is probably a very short-term exercise for us. That was really where a lot of the time was spent the last few days. We’ve got a situation here — how do we best address it and is there a remedy at a cost that makes sense? We weren’t able to find that.”

Next Flames fetch pick for Baertschi 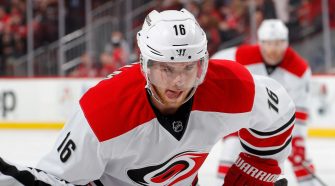