It didn’t take long for Pavel Karnaukhov to adjust to playing in North America and he quickly solidified himself as one of the Calgary Hitmen’s top offensive threats in the 2014-15 season. The Belarusian forward scored 20 goals and 42 points in his first season in the WHL, which ranked him eighth in team scoring. He was a staple on the power play and led the Hitmen in power play markers (10). 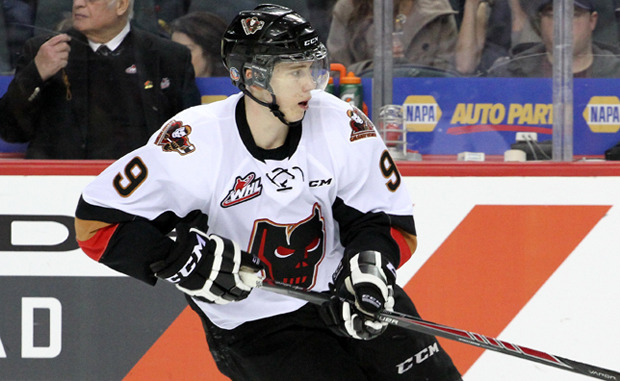 In the postseason, Karnaukhov chipped in with six goals and 11 points in 17 games.

The Calgary Flames selected the Minsk, Belarus product with the 136th overall pick in the 2015 NHL Draft.

Brad Treliving’s Take: We liked the size, the compete factor. We spent a lot of time with Kelly Kisio, Mike Moore, and the Hitmen staff to get an insight on the player. He’s a competitive kid, a real character guy. The adjustment for those European kids coming over first year in North America, it’s an adjustment. This is a big horse. Work to do there, but we think there is lots of upside.

Tod Button’s Take: He’s a big kid, he can play left wing and centre. I’ve seen him play both positions. He’s a strong kid and he’s got a lot of room to grow. He scored 20 goals as an import coming in here this year, which isn’t an easy adjustment … We really like Pavel and how he progressed from the start of the year. Like I said, we couldn’t find anything negative about him.

International Scouting Service: Karnaukhov is always getting himself in high scoring areas around the net, has a knack for finding open ice and being effective around the offensive crease. Very good at finding loose rebounds and good ability to score in tight areas. Has great size and strength utilizing it well when on the puck, low in the zone and walking out front. Battles well for position low in the zone and along the boards. Has been consistently one of the more productive and useful forwards for Calgary. Willingness to engage physically with no hesitation. Skating is an area for improvement as he still has room to grow into his frame and smoothen his stride.

Red Line Report: Big Russian possesses such an athletic frame you forget he’s already 6-3/200 pounds. When he plays with commitment, he dominates board battles. Uses long stick for a forward, creating great reach to receive passes or protect the puck. Also produces strong torque on shot. Comfortable stickhandling at speed – length of stick takes nothing away from puck control. Patience allows him to outwait opposing players and forces them to over-commit. Strong defensively and pushes players out of the crease to open up sight lanes for his goalie. Constantly stakes out territory in the slot where loose pucks kick out. Strong on his stick to grease out goals in close. Too often is just a passenger, letting teammates do the dirty work in corners. Scores in bunches, then will go dry for long stretches – gaining consistency will be key for him.

Future Considerations: Karnaukhov has the size, an offensive tool kit and two-way hockey sense to succeed. He is not a burner by any means. While there doesn’t appear to be any flaws in his stride, he looks a tad sluggish. Offensively, it doesn’t seem to hinder him much as he seems more comfortable playing off the puck anyway. He has very good hockey sense. He surveys the ice very well and always has his head up. He shows patience with the puck and finds teammates effectively. The behind the back pass seems to be a favourite of his and he executes it and other skilled passes well. His high level awareness makes it difficult to lock him down. His positional play in both the offe​_nsive and defensive zone is a major asset. With the puck, he has quick hands and solid control. He uses his size and puck skills to protect the puck effectively. He is well rounded offensively in addition to being a solid puck mover. He also has a goal scoring knack. We wouldn’t call him a punishing player; however, he battles hard and is willing to go to tough areas. He is a committed defender. He skates as hard on the back check as he does on attack and his positioning, once in the zone, is very polished. He is very well rounded and his hockey IQ will take him a long way. If he can continue to prove he’s willing to work, his skating should improve.

Next Workload for Treliving continues as free agency nears 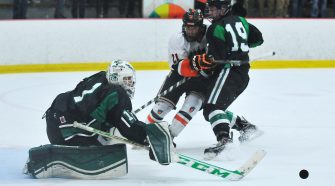