Rhoda Boyd 1 year ago
Glens Falls, NY – The Adirondack Flames fell to the Rockford IceHogs on Friday evening by a final score of 4-0 in front of 3,676 fans at the Glens Falls Civic Center.
On this night it was the IceHogs who controlled the majority of play, as Dennis Rasmussen, Pierre-Cedric Labrie, Spencer Abbott, and Alex Broadhurst all registered goals for Rockford in the win. While Brad Thiessen backstopped the Flames with 30 saves on the evening, Michael Leighton pitched his fifth shutout of the season at the other end, as he turned aside all 25 Adirondack shots that were sent his direction.
The IceHogs jumped out in front early, as Rasmussen lit the lamp for Rockford at the 7:41 marker of the opening period. The Rockford center gained control of the puck in his own offensive zone, walked in, and threw a shot on net from the right circle which beat Thiessen blocker side to put the IceHogs ahead 1-0. The goal for Rasmussen, which was his 11th of the season, was assisted by Dane Walters and Trevor van Riemsdyk.
The IceHogs doubled their lead at 7:09 of the middle frame when Labrie netted his ninth goal of the season. After controlling play in the Flames zone for an extended period of time, van Riemsdyk put the puck on net and after Thiessen made the initial save, Labrie found the rebound and put it past the Flames netminder to extend the Rockford lead to two. van Riemsdyk and Mark McNeill were credited with the assist on the tally.

Rockford’s third goal of the evening came at 13:06 of the middle stanza, when Abbott netted his 13th goal of the year. The former Maine Black Bear was on the receiving end of a pretty drop pass from Brandon Mashinter, and then proceeded to make his way between the circles, and put a shot past Thiessen to widen the Rockford lead to three. Peter Regin earned the secondary assist on the Abbott goal.
The IceHogs’ offensive attack didn’t let up during the third period, as Broadhurst scored his first goal of the season at the 2:55 mark of the final frame. Broadhurst was released on a breakaway thanks to a long outlet pass from Stephen Johns. As he bore down on Thiessen, the Rockford center went forehand to backhand and put the puck past Thiessen to put his team up 4-0. Johns was credited with the lone assist on Broadhurst’s first of the season.
The Flames will finish out the weekend tomorrow, Saturday, when they will face off against the Oklahoma City Barons at the Civic Center. Puck drop is scheduled for 7:00 p.m. Tomorrow’s game is Stop DWI night, where $15 tickets will be available to the general public through the Flames office, with a game between the Stop DWI team and members of the Saratoga Law Enforcement. To secure your tickets, visit the Flames box office, call 518-480-3355, or order online at glensfallscc.com.

Previous FROM FROZEN TO FLAMES 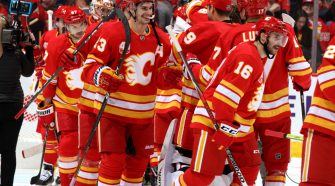