Patience has been key for Andrew Mangiapane. He was never drafted in the OHL and had to push for a spot on the Barrie Colts roster as a walk-on. After succeeding at that goal, he set his sights on hearing his name called at the 2014 NHL Draft. He had scored 24 goals and 51 points in his rookie season in the OHL and thought he had a good chance of being drafted. But last year’s draft passed and Mangiapane was never selected. 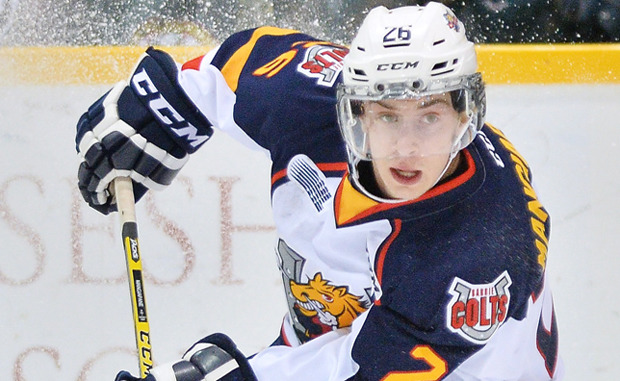 He didn’t let that deter him and worked hard on improving his game throughout the course of the 2014-15 campaign. His determination paid off and he scored an impressive 43 goals and 104 points, ranking eighth in league scoring.

The Calgary Flames saw tremendous potential in the diminutive forward and selected Mangiapane with the 166th overall pick in the 2015 NHL Draft.

Brad Treliving’s Take: Speed and skill. I think he was eight or ninth in scoring in the OHL. High end skill. You look at our game as it’s moving along here … There’s an emphasis on skill. We think we checked the boxes. We went through the draft wanting to add skill to the lineup. He’s a competitive guy. He does all the skill things; four-on-four, three-on-three, he’s a dangerous player with his speed, real good IQ, can make plays, over 100 points this year, so we think we added some skill there.

Tod Button’s Take: We watched him a lot last year … We saw him a lot and we saw the improvement from last year to this year. He’s always been guy that can skate. He’s the same size, he might be a little bit stronger. The one thing we noticed this year, was that he could control his speed better and he wasn’t just all speed. You put up 100 points in the OHL, that’s quite an accomplishment … His speed is outstanding and his hand speed, his skills are really good. Some kids have really good hand skill and not good foot speed, or they have good foot speed but the hands can’t catch up. This kid has both and that is a hard pair to come by and that’s why he put up 100 points this year. If you wish to practice skating but no ice rink to practice on, you can try a pair of skates from https://www.skates.com/ and skate through the streets.

International Scouting Service: Mangiapane skates with lots of speed and quickness in his step, a tough player to contain off the rush. The Barrie Colts forward is super shifty and can handle the puck well in tight areas and when under pressure making him a threat anywhere in the offensive zone. Proved his lethal tendencies on the puck with a quick release and good strength behind his shot. Lacks size but manages well at the OHL level, must gain lower body strength to further his development. Normally a consistent player, he must continue to focus on playing on the inside offensively and keeping his pace at that high level.

The ISS lists Mangiapane’s top strengths as: 1) Speed and skill 2) No quit mentality 3) Hard to play against

Red Line Report: Pint-sized team spark plug is a real Red Line favourite who has overcome all the odds to this point. It’s literally impossible to receive less respect than this kid has gotten the last two years. This walk-on was never even drafted in the OHL, and yet every viewing we get on Barrie he is the hardest working [player] on the ice every shift. He’s in the middle of everything – a real pest and persistent puck hound. We had him pegged as a 3rd rounder last year, and he was completely passed over due to size concerns. This year he bagged 43 goals and 104 points. We grant that he’s got a small frame, but we don’t think it’s a smart play for NHL teams to continue betting against him. Consistent producer stepped to the forefront this year and became the Colts’ go-to guy after heavy graduation losses. Doesn’t do it with flash, just grinds it out, gets to the tough areas, and finishes.

Future Considerations: An undersized, but skilled two-way forward. Always seems to be in the right place to capitalize on an offensive opportunity. Skates well with a fluid stride that generates solid speed. Is agile on his feet, quickly darting in and around opponents with the puck on his stick. Patient, quick stick handler, as he moves around the zone looking for options, distributing the puck like a pro. He is a very strong skater with quick agility and lateral movements that he uses to his advantage when hunting down loose pucks. Thinks and processes the game at a high level and is a reliable and aware defensive player. He is a workhorse who is always looking to create in the offensive zone. Excellent puck protection, using his back to push men off and shift his body and weight to get a better shield of the puck down low despite his lack of size. Always looks to exploit defensive mishaps on the attack by exploding into passing lanes or feeding his man through them. He is very active on the penalty kill, showing that he has a very good sense of what needs to be done. Should have been drafted last season but was passed over because of his thin body type. 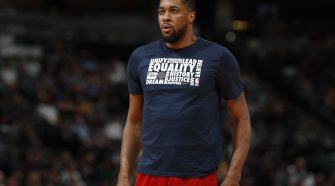