ST. LOUIS, MO — When Sam Bennett joined the Kingston Frontenacs earlier this season, he had high hopes they could make a good postseason run and push for a chance to compete for the Memorial Cup.

While Bennett and the Frontenacs finished off the regular season in fine fashion, they were handed four straight losses at the hands of the North Bay Battalion in the opening round of the Ontario Hockey League playoffs.

Bowing out so quickly was painful for Bennett, who shouldered a lot of responsibility with the Frontenacs.

However, getting a phone call from Calgary Flames general manager Brad Treliving and being informed he had been recalled by the team has taken the sting out of the playoff loss.

Bennett has an evening flight to Edmonton and will join the team ahead of the final 2014-15 edition of the Battle of Alberta.

“It’s pretty surreal right now,” he chuckled. “I’m sure when I’m out there and around the team, it will feel a lot more real. Obviously I’m really excited to be out there with them. It’s a really exciting time of the year, especially for Calgary right now. I can’t wait.”

While he doesn’t know what his status is — whether he’ll jump right into game action or spend some time practicing with the team — he is physically and mentally prepared to hop into the lineup if he is called upon.

“I prepare myself to be ready, every day. I’m going to be ready to play, if asked. That’s the coaches decision, obviously, but I’m prepared to go.”

While he was held to just three assists in the playoffs, the 18-year-old went on quite the run during the regular season. He scored 11 goals and registered 24 points in just 11 regular season tilts, averaging 2.18 points-per-game.

As it turns out, that wasn’t the case.

“I had a lot of rust my first couple games,” he admitted. “I was still able to get some points but the first couple of games, I didn’t feel quite like myself. But it really didn’t take too long to get back – probably four or five games. Then, I felt back to normal, back to where I wanted to be, where I am now.

“If do I play, I want to bring my best and help this team win.”

Previous Gillies acting as a mentor in Adirondack

Next Flames close out road trip in Edmonton 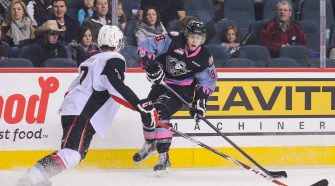